18 photos
(BROOKLYN, NY) A recent fundraiser in New York City, organized by former Vermonters, brought over $12,000 for Irene relief here at home. Blue Man Group supported this “I VT NY” event which was conceived by two Vermonters who are now members of the troupe--Isaac Eddy and Zea Barker. The money they raised will be shared between the Vermont Farm Disaster Relief Fund and the Vermont Disaster Relief Fund.
The huge Brooklyn Bowl complex hosted the evening while Amanda Palmer, an eclectic and very popular rocker in the cabaret and “Brechtian” vein stepped up as headliner. A showcase of Vermont products supported the cause with donations from businesses as diverse as Burton Snowboards, Sugarbush, Courierware, WhistlePig Whiskey, Quaker Hill Granola, Vermont Creamery, and The Center for Cartoon Studies. The Cabot Creamery Cooperative of Vermont came aboard as a major sponsor.
“Once again the farmer-owners at Cabot came through,” enthused Eddy. “Cabot’s involvement was huge. They covered our expenses, guaranteeing that our gate and auction proceeds would all go to the relief effort.”
While remarkable progress has already been accomplished, residents rebuilding their flooded homes, businesses and farms are facing a longer term recovery. Donations are still needed and can be made through .
On stage, Palmer’s talents were joined by others, including The London Souls, Sonya Kitchell, D.J. Spirit Bear and Blue Man Group. An impromptu Palmer/Blue Man on-stage rave with Vermont maple sugarmaker Max Cantor, from Deep Mountain Maple in West Glover, was hilarious.
The surprise of the evening was when Peter Yarrow, of Peter, Paul and Mary fame, took the stage and paid homage to Palmer, thanking her “for being a voice for the people, for standing in solidarity, for being here tonight.” Then, these two activists sang “Blowin’ in the Wind,” and “If I had a Hammer.”
“Playing with Peter was a revelation,” Palmer said later. “I felt like I was receiving a pure folk transmission.”
Looking back on the evening, Eddy’ feels “This was the moment in the night that made the whole event truly special."
Many artists contributed work that helped make this a successful evening. They included Brookfield’s Ed Koren, who designed the poster, and numerous others including photographers Mikael Kennedy, Brian Scott, Elise Rasmussen, and Bob Eddy. Original art was given by Samuel Rowlett, Alec Longstreth, Brett Haines, Amanda Palmer, and Jennifer Kahn. Darkcloud, a Vermont-born Brooklyn street artist, designed t-shirts and other artwork. Long Trail Brewing supplied the evening’s beer.
To bring Irene’s impact closer to the NY audience, 30 video monitors throughout the Brooklyn Bowl showed photographs of Irene’s devastation in Vermont. All of them came from the pages of The Herald of Randolph.
At the heart of the welcoming area, were Stuart Comstock-Gay and Scott McArdle of the Vermont Community Foundation, which has helped coordinate much of the philanthropic response following Irene.
“The energy of this evening is just incredible,” said Comstock-Gay. “These people are enthusiastic, they are concerned, and they care … What’s become very clear to us is that when people are given a taste of Vermont, they care about Vermont. Vermont is a beacon of inspiration and hope.”
The cast and crew of Blue Man NYC enthusiastically supported this event because there are so many Vermonters in the group, including Brian Scott and Chris Bowen.

Donations are still needed and can be made through www.vtfloodresponse.org 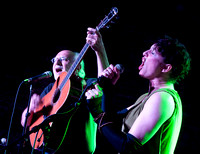 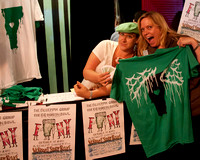