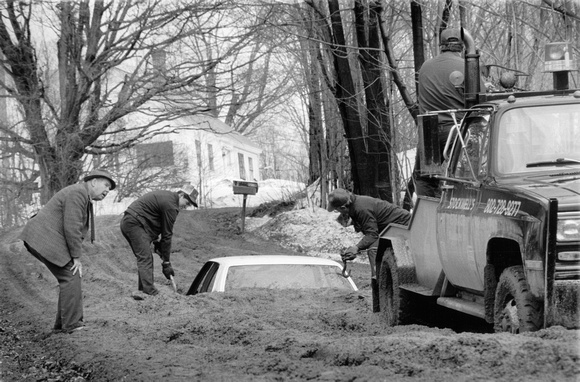 Mud Season -
During Vermont’s improbable mud season, many back roads become impassable. One particularly bad year, we decided to have a little fun at The Herald. The front page photograph we ran on April 1, 1993, has become something of a legend. It was one April Fool’s joke that truly fooled our readers. The key ingredients were Jack Drysdale, former editor and publisher of the paper, Lenny Stockwell’s tow truck and crew, a massively muddy road, and a strategically placed car roof.
While the photograph was completely arranged, it resonates with viewers, as it captures the true feeling of Vermont's infamous fifth season.
©2017 Robert Eddy, All Rights Reserved
Powered by ZENFOLIO User Agreement
Cancel
Continue